Amazing piece! All hand painted in tiny detail. The wing lid comes away to reveal the hidden hollow in the base for trinkets. Very geometric hand painted pattern to the wings. Never seen this in the 40 years of collecting bee items. Time to go to a new home to enjoy!

Base still has an vintage label, written on it, ‘Pirkenhammer;. Embossed is F&M. There is no base stamp, only the embossed letters.

Pirkenhammer founded in 1803, a porcelain factory was built in Karlovy Vary (also known as Karlsbad), and the brand Pirkenhammer was originated. The Pirkenhammer factory is located near the center of the city.

Around 1820’s Pirkenhammer was considered the best in Bohemia greatly valued for its superior translucency rivaling the French manufacturers. They were awarded a gold medal at the Vienna World fair in 1839. The awarding committee commented that it demonstrated “a good taste in shape, clear body, smooth glaze, and high quality of printing”. Pirkenhammer is known to have made fine porcelains for royalty throughout Europe as well as the Papacy. 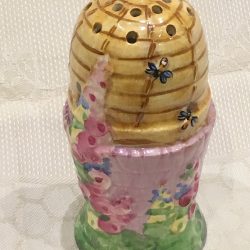 Rare impressive and highly collectable Mauve coloured base. 1930s example of the classic beehive on a stand, sugar shaker. This is well coloured and shaped by Royal Winton for their Beehive range.
not rated £230.00 Add to basket
Sale! 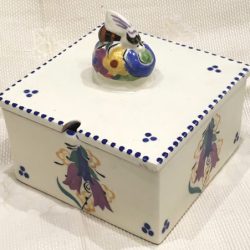 Vintage piece from the well known Poole Pottery Works in Dorset. Has a cut out for a honey spoon which is rare. Beautifully hand painted details throughout. Great condition. Collectors item.
not rated £299.00 Add to basket 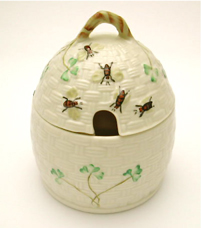 Belleek China Shamrock Honeypot The basketweave and shamrock design (painted by hand) has been a mainstay of Belleek’s porcelain since the 1880s. Fine Parian china from the Belleek works in Ireland.
not rated £77.95 Add to basket
Sale! 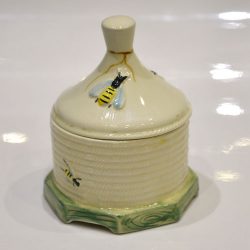 Beehive shaped honeypot with painted bees. Nice sized pot to hold honey, sugar, jam.
not rated £45.00 Add to basket
We use cookies on our website to give you the most relevant experience by remembering your preferences and repeat visits. By clicking “Accept All”, you consent to the use of ALL the cookies. However, you may visit "Cookie Settings" to provide a controlled consent. See our terms and conditions and privacy policy.
Cookie SettingsAccept All
Manage consent